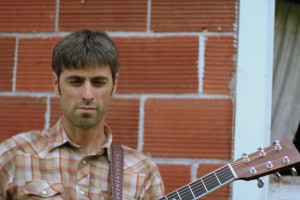 Smokin’ guitarist and vocalist Darren Campbell brings some Appalachian flavor from central Pennsylvania, though his addiction to Bluegrass really began in Boulder, CO and from many trips to Telluride Bluegrass Festival in the early ‘90s. Campbell honed his chops playing old blues and classic rock/folk, but nothing brings it together for him like a little grass! While he has a strong appreciation of traditional music, it’s hard to keep him contained for long! He cites virtuoso Tony Rice as his main influence in the Bluegrass style, along with Hot Rize and Charles Sawtelle, Doc Watson and Bryan Sutton, to name a few. Campbell also draws influence from the old Blues greats, like Freddie King, BB King, and Stevie Ray Vaughn. Darren lives in Ashland with his wife and two kids.