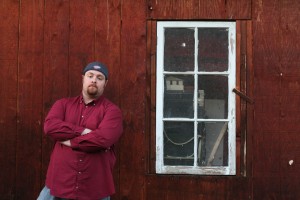 
Hailing from the snowy hills of Salt Lake City, bassist and vocalist Peter Koelsch was bit by the bluegrass bug at an early age. His dad Smokey used to own a popular record store in the beehive state, and was the premiere ticket outlet for the Telluride Bluegrass Festival held each summer in Colorado. As a result, Peter’s summer vacations were usually spent in the San Juan mountain range, listening to the high lonesome sounds of Peter Rowan, Hot Rize and the New Grass Revival, all of which have been tremendous and lasting influences on his musical approach. A rather unconventionally trained vocalist, Peter often taps into that bluegrass history when approaching melodies and harmonies, and often helps drive the ensemble’s sound. With strained vocal leads, face-melting harmonies and a rhythm that could power a freight train, Peter supports the group’s sound with style, strength and substance, doing it all with his token knockout smile.