“We really wanted to highlight the songwriting talents of the group,” says bassist Peter Koelsch about the project. “The guys have some inspired, catchy originals. They’re great songs about love and devotion, jealousy, hopelessness and redemption. It was so rewarding to put these songs out there on this album for people to check out. Hopefully they like what they hear!”

The album takes its name from an original song written by banjoist Stuart Green. Riverboat Gambler tells the tale of a no-good swindler earning his living on riverboat poker tables, floating down the rivers of the South.

The group has been playing in and around Oregon since early 2010, firmly situating themselves in the Northwest music scene. The group affectionately describes their style as ‘Southern Oregon Bluegrass’ – an exciting mix of whitewater-fast rhythms, tasteful harmony arrangements and plenty of low-end thump. Their high-energy and entertaining live shows are taking audiences by storm.

“When you wake up the next day, the music is still fresh on your mind,” says resonator guitarist Mark Lackey when describing the Southern Oregon Bluegrass sound. “The intensity, rhythm and excitement is still in my mind when I wake up. Sometimes I can’t even sleep at night!”

Since its release (debuting #11 on Airplay Direct’s Bluegrass charts), RIVERBOAT GAMBLER has been very well-received – both in print and on the public, country, radio-free, and AAA radio stations along the West Coast. The album was highlighted in Jefferson Public Radio’s April issue of Jefferson Monthly Magazine, and was mentioned in the April/May 2012 issue of Bluegrass Music Profiles. It has repeatedly been the top bluegrass album on the Bus of Real Country Online Radio, and has found steady rotation on JPR in Southern Oregon, KALX in Berkeley, KBOO in Portland, and more.

“The group plays with a nice groove and energy, and it’s just plain fun to listen and dance to…you can tell by listening to them that they love what they do.” – Jefferson Monthly

“Something extraordinary is behind this band…each one of them contributes vocals to create a sweet, high, lonesome sound” – Ashland Sneak Preview

“Eight Dollar Mountain is a bluegrass force to be reckoned with, and this album is representative of its best. Nice lyrics. Nice composition. Nice performance. A triumphant trifecta.” www.iseesouthernoregon.com 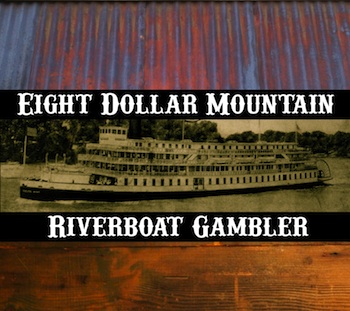